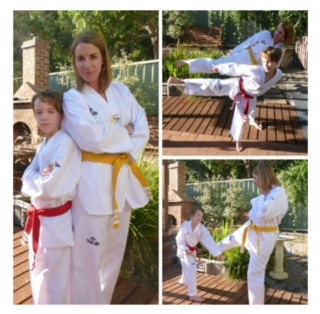 Am I having a near mid-life crisis? Is that what this is? Is this the equivalent of (*gulp!) buying a Harley or red sports car and dating a hot blonde?

All of this and more (MUCH more) is what went on in my busy brain when I decided to take up martial arts in my 40s – specifically taekwondo and specifically right after I turned 4-Ohhhhhhhh.

For five years I had sat on the sidelines watching my son Lucas, 10, progress through the ranks of Taekwondo Central’s membership.

True. It was something I had considered. I like being active. I wouldn’t be the ONLY mum doing it I had thought to myself. But comfort zones are…well…comfortable!

It’s hard to say exactly what it was that finally pushed me off that little bench on the sidelines and onto the floor. Looking back it was possibly the result of a perfect storm. Well-timed women’s self defence course presented by TC’s 6th Dan Black Belt Master Justin Warren which I seriously enjoyed and opened the door to these odd yet warm feelings of empowerment.
Committed encouragement from people I admire. And finally, (but most significantly) the loss of a loved one far too soon which inspired me to just LIVE!

I turned up to my first training session a complete bundle of nerves. It felt like Lucas and I had undergone this mind-bending role reversal because there he was being all sweet and encouraging, tenderly patting my arm and telling me how proud he was of me for having a go (*heart melts*).

I was utterly terrified that I would make a complete goose of myself in front of Master Justin, the other students and (worst of all) the other parents I had previously been sitting with on the sidelines. Ridiculous when I think about it now but self doubt is a weird and persistent beast.

Master Justin has coached literally thousands of beginners all the way to Black Belt level so in hindsight, pretty sure he’s used to working with students who are just starting out – even uncoordinated over 40 ones! The other students are busy doing their own thing and could care less how wonky my early kicking attempts were. And finally, the other parents are busy watching their own kids (of course!) and had next to no interest in critiquing my efforts.

Despite all my early irrational fears, I kept going back for more. I had a fierce new training buddy in Juliani Wayan who I didn’t want to let down and I sure as heck did not want to give Lucas the impression his mum was a quitter.

On top of that, bit by bit and to my astonishment, I began to realise I was actually loving it.

Fast forward a little to now and I have added a couple more stripes to my belt and in the process, some other really incredible things have happened...

I discovered I really (like REALLY) love punching and kicking. Who knew that in your 40s you could discover a whole other thing that you would just find to be so much fun? That’s heartening don’t you think?

Turns out I’m WAY more determined than I had ever suspected. That’s code for stubborn. Yep, I’m really, REALLY stubborn but it actually helps when you’re learning a new skill. Setting regular goals (like a belt level per term) that don’t come easily, that you HAVE to work towards, is so bloomin’ fulfilling. Don’t tell anyone but I really am so chuffed with myself.

When you try something new that not many other people are doing, you create an instant connection with a whole bunch of amazing new people because you’re sharing an experience that’s totally unique. I really love my new Taekwondo Central tribe and am so grateful to have found them.

Above all else, I think I may look back on this as one of the most significant things I have done as a parent for Lucas.

It is staggeringly joyous to be sharing a common interest with him like this. We set goals together, motivate and encourage each other and he gives me a hiding in sparring practice, bruised shins (It’s supposed to be non contact Lucas!) and all! We love training together. Believe me when I say this kind of bond is not something you can achieve with even the most committed support from the sidelines. You actually have to get in there, bare feet and all, and do it WITH THEM.

Don’t get me wrong, I probably HAVE had a few goose-like moments in my taekwondo journey so far. I suspect there’ll be quite a few more…I’m talking about you spin hook kick!

But being a bit goosey matters little now when I consider everything Lucas and I have gained as a result. It’s been a million times worth it.

So take it from me.  If you have entered 2018 and the vaguely middle part (I said VAGUELY!) of your expectant life with a desire to make things better AND an inkling that taekwondo classes might be the answer, here are my Top 5 Tips for starting taekwondo in your 40s.

To me, this guy is NUMERO UNO in importance. Head-height kicks are the signature taekwondo move and unless you work on flexibility, you won’t be kicking anyone above the toenail.  Much to my initial disgust, flexibility is just not something you can fake. But what I happily discovered is that you really can do stuff to improve it and you WILL notice the difference – pretty quickly even!

Flexibility decreases naturally as we age but working to improve it (stretching exercises every day if you can but at least three times a week) comes with a whole raft of associated health and wellness benefits like improved blood flow, less aches and pains and greater ability to complete everyday tasks without discomfort.

Training once or twice a week is not going to cut the mustard when you’re in your 40s. If you want to see real improvement in those kicks, you’re going to need to put in some time at home as well to build up that muscle memory in time for your next grading. It will hurt. Deal with it.

Your body is working in ways it has NEVER had to work before. Say HELLO to your Hip Flexors! During that first term I could not believe how sore I felt. My entire legs would ache and twitch after every session. Don’t get me wrong! It wasn’t excruciating or anything but yeah, it hurts. I’m telling you this now so you don’t have to be scared when it happens to you. It’s totally normal and not going to cause you any long-lasting damage. And guess what? After a while, it gets better!

In the meantime though, all those home remedies you’ve heard about really do help – hot baths, Epsom salts, massage, foam rolling, anti-inflammatory creams.

Listen to your body

Having said that, you get used to ignoring the groans and murmurs from your newly-discovered leg muscles, but listen up if that murmur turns into a SHOUT or worse, a SCREAM. You really do come to understand which pains are the ones you should be taking seriously as a sign to slow down or stop.

You don’t want to compromise your progress altogether by ignoring symptoms that need attention. The good thing about doing this in your 40s is that there is no real sense of urgency to reach your goals. You’re not working to a deadline. Take some time off if you need to. Heal properly and start again.

Did you know that only 1 in 20,000 people who take up martial arts, actually ever make it to Black Belt? One day I hope to be one of them. I can’t actually visualise it yet. “I will need to be able to do wharrrrrrt???”

For now though, I’m just happy taking baby steps in that general direction. Every little improvement I can see and feel, every stripe on my belt. I take a moment to acknowledge the wins, no matter how small. Sounds kinda cheesy I guess but here’s where my awesome new tribe comes in. They understand the significance of the baby steps where others might not so much. They’ll join you in celebrating them, just as you will take joy in helping celebrate theirs.

So what are you waiting for? Age really has absolutely NOTHING to do with it. If you want it, get out there and (just) do it. I’ll see you on the floor.