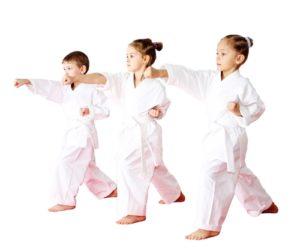 4 Benefits of Martial Arts for Children with ADHD

Attention Deficit Hyperactivity Disorder is a common condition exemplified by impulsiveness, hyperactivity and inattention, according to the Child Development Institute. Because many children diagnosed with ADHD have a short attention span and struggle with socializing and emotional control, a lot of parents don’t know what sorts of extracurricular activities will be enjoyable for their child without adding extra stress. Martial arts is known to be an activity that children with ADHD can not only enjoy, but use to help ease the symptoms of this disorder. Here are a few reasons you should consider enrolling your child with ADHD in a martial arts class:

ADDitude Magazine spoke with the athletic director at Summit Camp for Youth with Attention Deficit Disorders, Robert Giabardo. He said that team contact sports are one of the worst activities you could enroll a child with ADHD in.

“They have a hard time grasping the ‘play system,'” he said. “In order to participate in a game such as football, the player must always be focused not only on his or her role in the game, but must also be aware of the actions and physical placement of other players at all times.”

Rather than enrolling your child in a sport that requires such divided attention, consider a sport like martial arts. The instructor will be able to offer your child individual attention and tailor lessons to his or her needs and help when he or she needs it. Kids can also work independently and work on their own forms.

While you can sign your child up for individual martial arts lessons, most children take classes with other kids. However, this doesn’t mean  they’re competing with each other. Martial arts instructors know that kids learn differently and some kids require more assistance than others. The instruction and effort – the most important parts of learning a craft like martial arts – are completely individual, allowing your child to solely focus on that during the lesson. However, kids still get to enjoy the camaraderie of a team sport in a martial arts class because they’re spending so much time with the other children in the class. This is great for kids who struggle with socializing and making friends in school.

ADDitude Magazine also spoke with Patricia Quinn, a developmental pediatrician who specializes in ADHD at the Pediatric Development Center. She said that that practically all of her patients give martial arts a chance because they offer so many benefits for a child who struggles with paying attention. One of these aspects is the fact that the practice tends to be ritualistic and choreographed.

“Rituals are good for ADHD kids because they make behavior automatic,” she said. “For most of us, daily actions such as remembering to take your medicine are automatic. But without rituals such as ‘every time I brush my teeth I take my medicine,’ people with ADHD don’t remember.”

Martial arts also require you to control your body and follow the motions. This skill doesn’t come ingrained in children with ADHD, so the practice of martial arts can help them incorporate this control into everyday activities.

It allows them to release energy,

Many children with ADHD struggle to sit still in a classroom or any other environment that requires them to sit. A lot of kids release this energy by fidgeting or standing up and walking around. It’s important for children with ADHD to have some outlet for this energy. According to Impact ADHD, not only do martial arts help stimulate the brain, assisting with focus, but they also allow children to move and release the energy that they’ve been building up all day in the classroom.